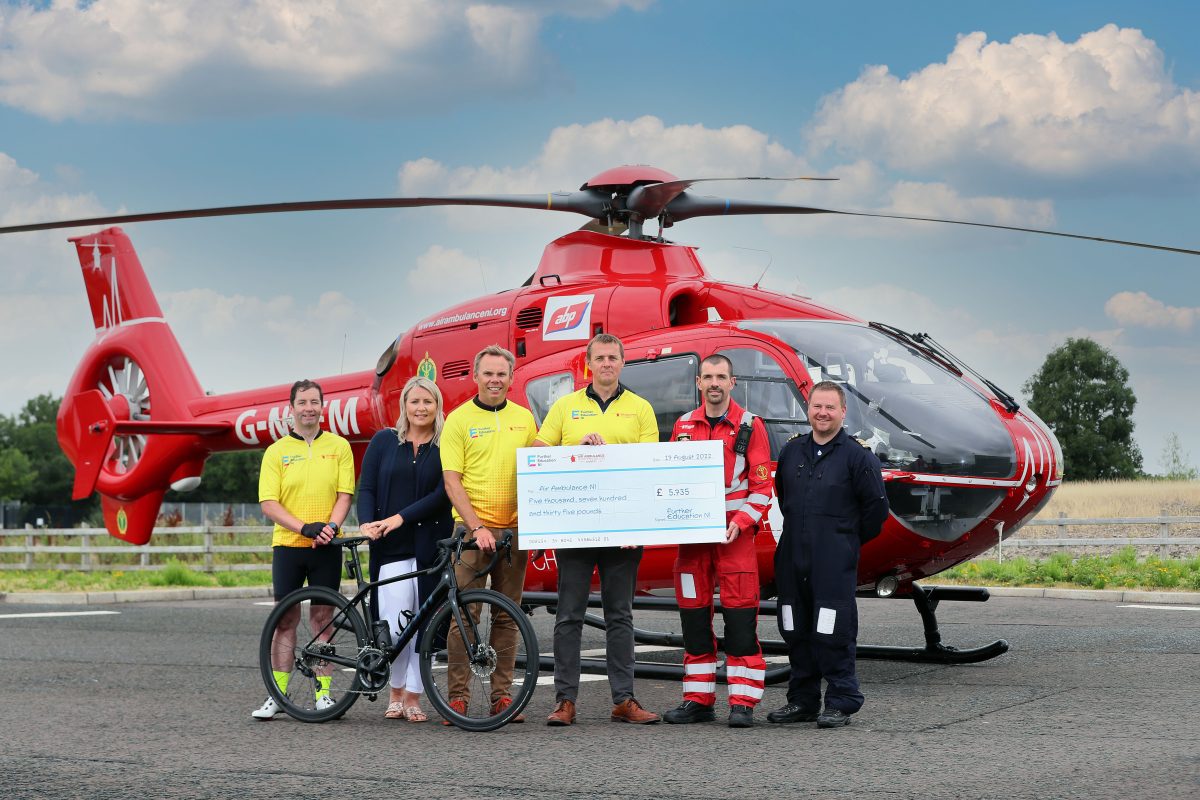 Staff from Northern Ireland’s six Further Education Colleges have raised £5,735 for Air Ambulance NI after participating in a charity cycle on Friday 17 June.

Representatives from the Further Education Sector handed over the cheque to Air Ambulance NI at their headquarters outside Lisburn.

Each of the six colleges in Northern Ireland put forward a team of cyclists, both experienced and first timers, who cycled around their respective campuses to pass a baton to the next College.

The teams fundraised to support a vital regional service at a time when the health service faces enormous pressures in the wake of the recent pandemic.

The event highlighted the collaboration and collegiality between the six colleges in their work to make a positive impact to their local communities.

“The response from our staff and students to our charity cycle for Air Ambulance NI was fantastic. Our ‘Further Education 400’ was really well attended and a wonderful experience for everyone involved.

“All six of our colleges were thrilled to be raising money for a truly worthy cause, with Air Ambulance NI providing a vital regional service, and we are elated that £5,735 has been raised by our cycle which will go some way to keep the service operational.

“I would like to thank all of our staff who trained and participated in ‘Further Education 400’. They have trained for months to take on the cycling challenge and it is a real feat that has been accomplished both physically and charitably by the college teams.”

“Air Ambulance NI works in partnership with the Northern Ireland Ambulance Service, to deliver the helicopter emergency medical service (HEMS) for the region. The HEMS team attend patients who are seriously ill or injured, bringing emergency pre-hospital care direct to the casualty with the aim of saving lives, brains, and limbs. Each year the charity aspires to raise £2 million to maintain and sustain this service so public donations are crucial.”

“The £5,735 raised through this event will no doubt make a significant contribution to meeting that goal and ultimately keeping Air Ambulance NI flying. A huge thank you to everyone from the Further Education Colleges for their support, it is greatly appreciated.”